Although screen printers may utilize a multitude of different ink over the course of their career, most are likely to use just two or three for printing on garments. Because water based and plastisol inks are the two most widely used for garment printing, our primary focus will be on those. 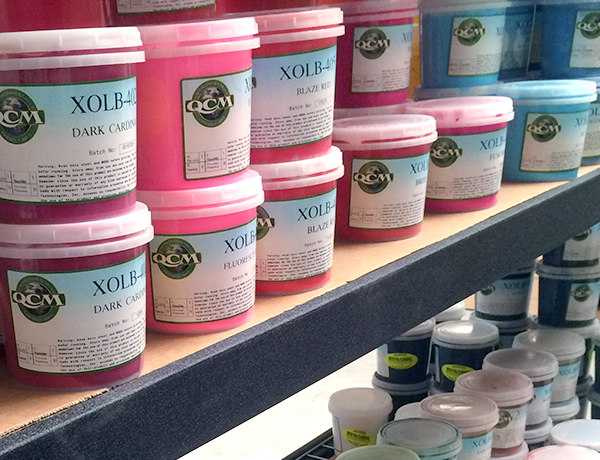 Because of its high opacity and ability to sit on screen for long periods of time without drying, plastisol ink is arguably the most widely used garment ink in the United States. Other factors such as durability, flexibility, and versatility have also led to the popularity of plastisol ink. Specialty plastisols are also widely used and often offered as additives, bases or in premixed containers that are ready for use. Specialty inks include but are not limited to:

With all additives and bases it is a good idea to mix small batches and test them before you alter your larger containers of ink.

Outside of the United States it could be argued that water based inks are the most popular garment inks in the world. Water based ink is popular because it saturates the fibers of the garment and in essence dyes the garment rather than resting on top of the fibers like plastisol. Because of this, the print is usually softer and more solid than with plastisol. While there are some distinct advantages to water based inks there are also some serious pitfalls that one should be prepared for.

In the end, water based inks are a great choice for printers of all skill levels and should always be considered a viable option. As long as you know what to watch for and how to properly use them , water based inks can give you some of the best looking prints.

Discharge ink is offered in both water based and plastisol varieties and works well both ways. Discharge inks work by removing the dye used to color the garment and replacing it with the pigmented ink color. These inks have gained popularity in recent years because they allow a printer to work on dark garments without the need for under basing. Important things to remember about discharge inks include:

As with any ink system, if you gather the proper information and do the proper testing, discharge inks can be a great addition to your print shop and may even save you time and money.